Skip to content
Today, I’m excited to share with you this guest post by Leigh Himes, author of the amazing “The One Who Got Away,” which is available now. I was lucky enough to get to read an advance copy of this book, and I just adored everything about it. 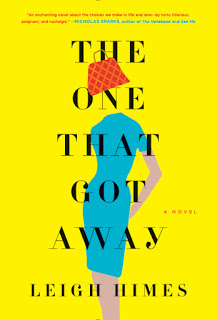 One evening in my late twenties, I found myself standing immobile in the pouring rain beside a large metal FedEx collection box, unable to put the document I had just signed—an official acceptance letter for a snazzy tech job in Boston—inside. I knew the last pick-up was at seven o’clock and I had better decide, and yet I couldn’t move, frozen with anxiety and doubt. I was so fearful that this one flimsy cardboard envelope—this one decision—would affect my entire life. And I was certain that the right choice would lead to a lifetime of happiness, whereas the wrong one would find me broke, alone, and miserable, roaming the back alleys of my hometown in a robe and slippers mumbling “If only, if only….”
The problem wasn’t the job, all the unknowns, or even the thought process that got me to that point. The problem was that, like always, I gave life decisions like this way too much power and way too much of my time. I’d make infinite lists of pro’s and con’s, taking long walks looking for “a sign,” and asking anyone and everyone—from colleagues to friends to blind dates—what they would do. And even post-decision, I would continue the endless ruminations, questioning each choice and wondering about the road not taken.
That night at the FedEx drop-off, the man I was dating kindly drove over and pulled me out of the rain. “If you’re not one hundred percent sure you want the job, don’t take it,” he advised. I conceded he was probably right, trashed the letter, and went home slightly relieved and mentally exhausted, but still unsure.
But guess what? Today, I can’t even remember what the company was or what the position entailed. In fact, I rarely think of it, and when I do, it’s only to laugh.
Because that’s what happens when you get older and wiser and you have decades, not just years, of choices behind you. It’s not that decisions become easier, or you get better at them. Or even that there are less of them. (In fact, when you have kids and a spouse, you have to help with all their big decisions, too.) What changes is that you finally realize—write this down, all you over-analyzers, out there—it doesn’t really matter.
Let me repeat. It didn’t matter that I decided not to take that glamorous position. It didn’t matter that I stayed in Philadelphia, took a lesser-paying job, and eventually moved to the boring suburbs. It didn’t matter that I broke up with the man who talked me down off the FedEx ledge, and quickly dove into another ill-fated relationship. Either way, I am now where I was meant to be and doing what I was meant to be doing (for now, at least).
Life isn’t as black and white as we think, and one decision, or even several, doesn’t send us down irreversible roads we can’t find our way off of. There is no giant fork in the road, with one path leading to the gleaming castle and the other to the haunted woods. And even if there is, it doesn’t determine our happiness. Only you, not your circumstances, can do that.
And, the even crazier thing is that sometimes “wrong” decisions are actually right ones in disguise. Case in point: I loved living in downtown Philadelphia so much I vowed I would never leave. But with my new husband—the same guy who rescued me from my rainy FedEx hell, and who came back into my life years later—and I both working from home and a baby coming, I found myself moving to a sleepy, stuck-in-the-1950’s commuter town. It’s also where, after baby number two, that I suffered post-partum depression so severe that sometimes it would keep me up literally all night long.

It was during one of those excruciating nights, my mind racing with equal amounts of hormones and regret, that I opened the magazine and read the article that sparked the idea that would become my first novel. A twist of fate that has not only given me a new career, but a greater appreciation for all that I have and all the twists and turns of life that had gotten me to this point. Had I never “mistakenly” moved to the ‘burbs, this novel of which I am so proud—the story of a young struggling mother who gets a chance to live the life she always thought she wanted—would not exist.
Like everyone, I still have trouble with big decisions. But instead of agonizing and reaching for my faded, battered copy of “Coulda, Woulda, Shoulda,” I pick a lane and hit the pedal. I know that there’s no one decision that leads to a life of unhappiness, and no regret worth more than a few moments of your time (murder, heroin, and pixie haircuts excepted).
Maybe sooner than you think, you’ll be able to see that the road you have chosen may not be smooth, but it’s still getting you where you need to be. Because—take it from me—moving in the wrong direction, falling on your face, or even standing motionless in the rain, can still be a step forward.

Leigh Himes’ debut novel,“The One That Got Away,” is the story of a struggling working mother who gets the chance to live the life she always wanted with a man she almost dated years before. Called “brilliantly realized” by Booklist and “a rewarding investigation of how all that glitters may not be gold” by Library Journal, The One That Got Away is in bookstores and online everywhere May 31st. (Hachette, 384 pgs.).