After Mel's disastrous promo video goes viral, a "family values" group launches a protest against her dance studio. Their leader isn't just trying to stop her from teaching--he's using Mel as a moral scapegoat for his own political campaign. If he wins, he threatens to change the laws to keep all pole dancing out of their community.

Mel's not going down without a fight. Since running for office beats unemployment, she decides to face off against him. She hires a campaign manager and tosses her hat in the ring. There's just one problem: voters don't get pole. Mel needs to change her image, fast. If she can't get the people on her side, she won't have a business to save. And then there's Daniel. Who knew the hardest part about running for office would be not losing her heart?

Fans of My Fair Lady will love this fun, witty twist on the classic. 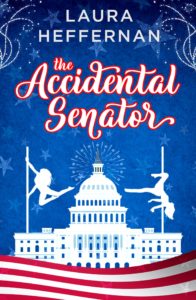 Well, practicing law was getting boring anyway, so Lana dives into the deep end. She seeks guidance from Senator Jason Park and irresistible lobbyist Steve to navigate the shark-infested waters of politics. Then someone she trusts tricks her into casting the deciding vote for a bill that spells disaster for the community—including her best friend's brand-new pole fitness studio.

There has to be a way to stop it. If Lana can't undo the damage she caused, she's going to lose the support of her community and the most important person in her life.

*Eden Books and Smashwords sell books for any e-reader