Writers are no strangers to rejection. It’s part of the game. Every contest, only a small percentage of the entries can be chosen. Agents reject something like 99% of queries they receive. Then they reject something like 99% of partial and full manuscripts they receive.* Even after finding an agent, it has to find the right editor. Most books get rejected at least a few times before finding a home. “A few” could be a gross understatement.

So, why am I bumming you out? That’s actually not the point. The point is this: No matter how discouraged you get, no matter how frustrating, it’s important to stay positive – at least in public.

You don’t have to feel positive. But it’s not helpful to post on Twitter how depressed you are, or post that you’re worried you’re never going to make it. You know what does help? Forward inspirational messages. Support other writers: retweet their good news. Send congratulations, even if you don’t mean it. At the very least, favorite tweets when good things happen to other people. If you absolutely, positively, cannot manage to even fake begin the slightest bit supportive of other writers, and have nothing positive to say – get off the internet. Close Twitter. Talk to a very small group of friends and CPs, preferably in person over a cup of coffee. If you can’t swing that, go for private messages or emails. But keep it private. The internet is forever. 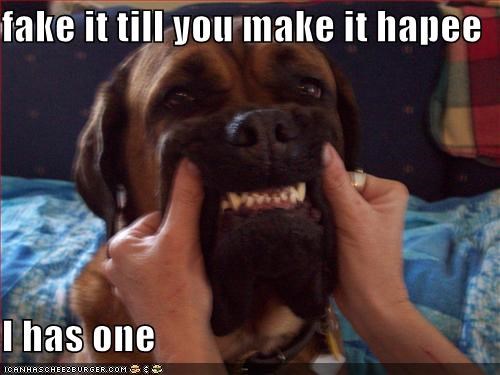 Don’t make me hold the corners of your mouth upward.

There were many times I felt discouraged and wanted to give up. There will probably be more. Life isn’t perfect, and this is a tough gig we’ve signed up for. You know what I do? Every time I feel discouraged and frustrated, I tweet something supportive to or about other writers. Every. Single. Time. Giving back to others helps me to feel more upbeat. The only thing wallowing in self-doubt ever did was making me not want to write more. Don’t sabotage yourself.

You can do it. You’ll get there. I have faith in you.

* Yes, I made up these numbers, but I don’t think they’re that far off.