I’m so thrilled to be able to share this post with you. Rick was part of my first Query Kombat as host, after being involved as first a Kontestant, then a judge. And I saw right away how special this story was. Take a peek at the original entry here. 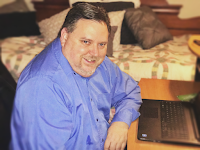 Rick Wheeler lives in Northern California in a
multigenerational household. When he is not writing middle grade fiction, he
works with at risk youth as a Deputy Probation Officer. He enjoys listening to
classic rock, hanging out with his dog, and having tea parties with his
granddaughters, not necessarily in that order.
Follow Rick on Twitter @eswheeler1992.
Posted in Blog and tagged Middle Grade, Query Kombat 2016, Rick Wheeler, Success stories.