In the days leading up to Query Kombat, I’ll be featuring guest posts from the judges on a variety of writing topics, from ways to polish your writing to common openings. Check back and follow me on Twitter to stay updated. Today’s post is from Kelly DeVos. 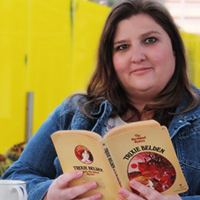 A third generation native Arizonan, Kelly deVos can tell you everything you’ve ever wanted to know about cactus, cattle and climate. She holds a B.A. in Creative Writing from Arizona State University. Her debut novel, FAT GIRL ON A PLANE, will be published in 2018 by Harlequin Teen and her work has been featured in Normal Noise and 202 Magazine.
Blog | Twitter | Instagram
FAT GIRL ON A PLANE
Goodreads
|Amazon
| B&N
| Book
Depository | Indigo
Posted in Blog and tagged Guest post, Kelly DeVos, QKJudgeTips, QueryKombat.